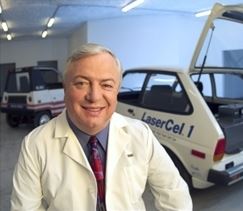 With the advent of the new energy crisis – or, perhaps, the new recognition of the old energy crisis – of 2003, Time Magazine featured a Special Report titled, The U.S. Is Running Out of Energy, in which it analyzed the U.S. energy predicament and looked at various options for its resolution.

At the end of the report, Time gave a brief re-cap on Roger Billings’ longtime endeavors in hydrogen energy, which it titled Hydrogen is in His Dreams.

Read the story: Roger Billings – Hydrogen is in His Dreams

“Known to many who follow his exploits as Dr. Hydrogen, Billings . . . . is an affable inventor who has been promoting hydrogen since he was in high school. He has built hydrogen cars and a hydrogen house. He has converted small appliances to run on it, and he owns patents on hydrogen processes.”