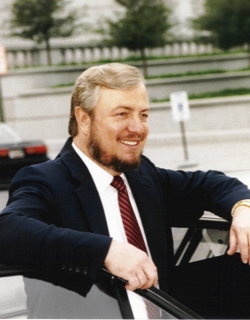 “What of today’s news is of most lasting significance?  Maybe this: (First a little paragraph of background.) We can run automobiles with nothing but water in the gas tank, you know.  We can run cars on hydrogen made from sea water; limitless supply; burns clean.  Dr. Roger Billings demonstrated the feasibility of a hydrogen-powered automobile twenty-five years ago, but it was too costly.

Today, Dr. Billings announces a breakthrough which he says makes it cheaper to burn water in your car than to burn gasoline. He calls it the LaserCel™.  The hydrogen fuel cell would replace the conventional internal combustion engine.  Sixty to eighty percent of the hydrogen energy put into the cell comes out as electricity.  No moving parts.  Now, electricity produced by the fuel cell would then power an electric motor which would run the vehicle.  The hydrogen fuel cell technology has proved itself in our space ships and most recently in our space shuttle, but until right now, the space-age version of the cell was not adaptable to ground transportation.  Now Dr. Billings says it is.  With a special electrolytic fuel cell fabricated by a high-power laser, it doubles the 150-mile range of his previous hydrogen-fueled car to 300 miles, and it cuts the cost in half.  Billings projects that the LaserCel™ reduces fuel cost to the gasoline equivalent of $1.12 a gallon.  He is preparing now to license the technology for commercial use.

Ambrose Manikowski of Lockheed Missiles and Space Company has seen a prototype.  He says, ‘The Billings fuel cell is an innovative design, and it may provide a viable alternative to the internal combustion engine and to batteries in undersea applications’.

In a prototype being built for the Pennsylvania Department of Energy, the hydrogen is stored in powdered metal hydride form.  That means it is utterly safe.  Chemistry professor, Dr. John O’M. Bockris of Texas A&M, speaking of the LaserCel™ said, ‘Roger Billings has come the closest to bringing to reality the DREAMS about which I have talked and written.  Billings’ laser fuel cell sounds to me as though it puts America ahead again.'”