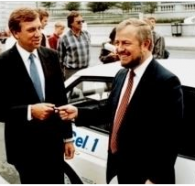 With the 1965 conversion of a Model A Ford to run on hydrogen, Roger Billings proved the technical viability of hydrogen as an automotive fuel.

With the 1991 conversion of the LaserCel 1 to run on a hydrogen fuel cell, he proved its practical viability.

The breakthrough – the hydrogen fuel cell with its increased efficiency over the internal combustion engine.

By utilizing hydrogen in a fuel cell to power an electric motor, Billings overcame the roadblock of the higher cost of hydrogen.

“Roger Billings doesn’t believe in limits – which is why Roger has extended the limiting envelope again. . . . . NASA has used fuel cells since the early manned space flights, but fuel cells have always been exotic, expensive toys outside the space community. Billings has made the fuel cell practical and relatively inexpensive.”