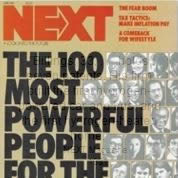 NEXT Magazine included Roger Billings in its “One Hundred Most Powerful People for the Eighties”, citing his pioneering work in hydrogen energy:

“Wherein NEXT editors, in their wisdom, having by virtue of assiduous research discovered fivescore Americans who have the potential to achieve substantial power over the minds and lives of their fellow citizens during this decade, identify those persons and set forth some of their most striking attributes and accomplishments.”