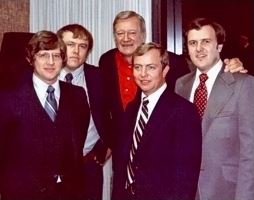 John Wayne had a way of getting things said — and done.

Here, with Roger and members of the Billings team, Wayne voiced his support for hydrogen — cowboy style.

Even after the oil crisis, some still remembered.  John Wayne’s commitment to America was more than movie screen deep.

Hot damn!  Move over, Arabs, hydrogen is comin’ through!